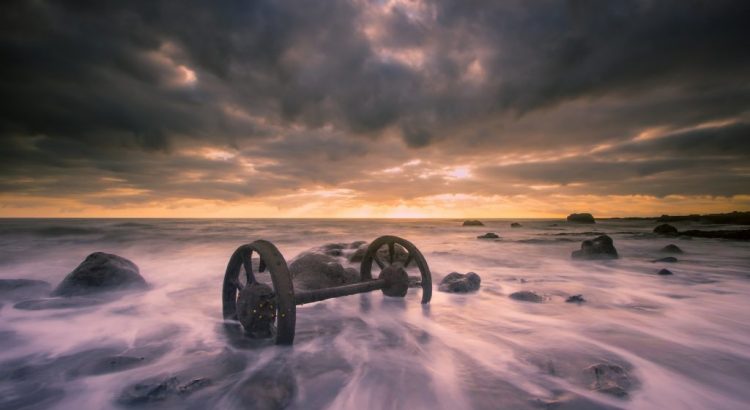 A low tide and sunrise combination tempted a 5am start with fellow photographer Stephen Tierney to see if we could capture the ‘wheels’ at Chemical Beach, Seaham. Making our way down the cliff path in the dark we found that the tide was not quite low enough for the wheels to show so we turned our attention to some of the other beach features while we were waiting.

The wheels slowly started to make an appearance through the surf.

The sun was threatening to make a full break through the clouds but there was just time to make good use of my wellies and catch a close-up shot before it was a total wash-out.

Once positioned nice and close to the wheels, I used the rule of thirds: setting the horizon to be one third into the image leaving two-thirds sky. I planned for strong foreground interest in the wheels with strong background interest in the combination of the sunrise and the clouds. A good sunrise needs clouds for colour and to control the intensity of the light. On this occasion the clouds produced nice sunbursts.

I positioned myself for the shot with the sunrise right behind the wheels to lead the eye into the photo from the front to the back.

To add to the foreground I opted to use a slightly longer exposure than normal to smooth the water but not too much so that it retained its streaks and detail.

Focus: I switched to Live View and narrowed in on the wheels using the zoom function and then used auto-focus to get a lock. Once I had confirmed that the focus was suitably sharp I switched to Manual focus to fix it in place. As the focal point was close, an aperture of f/9 was best to ensure a wider depth of field so that the background would remain in focus.

Now, looking through the live view on the LCD I could see that the sky was a lot brighter than the foreground.

To fix this I used a Lee ND 0.9 hard grad filter to balance out the difference and to prevent the sky from being washed out in the final image. Graduated filters have dark glass on the top and transparent glass on the bottom. Hard grads have a sharp divide between the two, soft grads taper from dark to transparent. Generally a hard edge filter should be used for straight horizons and a soft edge where the horizon may undulate.

Secondly, to smooth out the water and get the misty/streaky effect around the waves I needed to take a slightly longer exposure. For this I needed an ND filter, Neutral Density filters reduce the amount of light entering the camera’s sensor meaning that you can shoot for longer during daylight before a photo becomes over-exposed. The neutral density name means that in theory they allow all light colours through equally and don’t tint the image, though in practice no filter is perfect! I selected a 0.9 ND filter by Lee from my kitbag.

Each stop of an ND filter represents a halving of the light entering the camera and the filters look progressively darker in appearance with their strength.

The combination of the filters allowed an exposure of two seconds, long enough to capture the movement in the water without losing too much detail.

Use postcode SR7 7PS to get to the general area and look out for a windsock, it is adjacent to the car park entrance. Parking is free and open 24/7, use the spaces nearest to the entrance and then follow the path that starts between the end of the crash barrier and the wooden fence. Care should be taken with the tide as the beach is surrounded by cliffs and the high tide will cut you off at the only entrance and exit. The path from the carpark is also steep and involves climbing over large sea defence boulders at the bottom, care is needed as some of the gaps drop quite a way between. See my locations map for further information. The wheels appear at low tide, the shot above was taken at a tide height of 1.2 metres, further info on the tide timings can be found here.

Seaham’s Chemical Beach got its name from the nearby ‘Watson, Kipling and Co.’s Chemical Works’.

It was built in 1863 and soon began trading in soda crystals and magnesia.  The company was successful and sent one shipload per week to markets in London and Ostend.The area also featured a 1900s iron mine, a glass bottle works and Dawdon colliery. The remnants of the colliery track and equipment still remain on the beach.

The pictured wheels being from an old ‘Chaldron’ wagon that formed part of a train that tipped mine spoil into the sea. A chaldron is a measure of coal, 36 bushels worth.Waste glass from the bottle works where the carpark currently stands was tipped directly into the sea here and now washes up as sea glass, all smooth, coloured and worn. Pieces from the small to quite large can still be found.