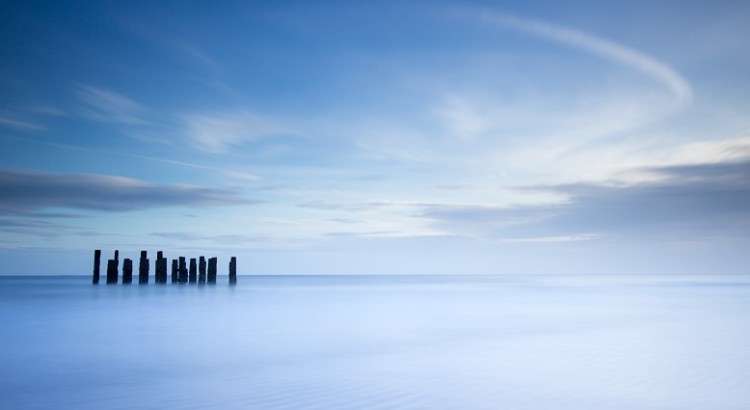 Steetley Pier in Hartlepool is a great location for Seascape photography.

I remember as a child being taken to a beach situated in a great industrial plant. A long narrow dark tunnel just wide enough to fit the car through opened out onto a scene of deep soft sand dunes and huge metal tanks and structures seemingly merged into one. It was many years until I re-discovered where this place was, Steetley Magnesite in Hartlepool. The complex is the gateway to a huge expanse of deserted sandy beach.

The plant is now closed and tanks and chimneys demolished, the land making way for new housing. There are still relics of the olden times here such as Steetley Pier that was used to collect the sea water that was required to make the magnesia, it stretches right out beyond the low tide point so that its pumping plant always had a supply of water to push down its two pipelines.

Having previously taken more than a few pictures of the pier I turned my attention to some other long forgotten parts of the plant, a number of vertical posts in the sea, I have no idea what function they used to serve! The posts only become visible at the lowest point of the tide so sunrise was out of the question on this day. I decided to go for a long exposure shot using a combination of the LEE big stopper to extend the exposure length in order to smooth out the sea and a 0.9 ND hard graduated filter to balance out the overly bright sky.

I used the rule-of-thirds to  set the horizon one third into the shot from the bottom and then the posts one third in from the left. This gave a minimalist and clean looking shot. The filters both enhancing the sky’s tones and smoothing out the waves.

LEE Big Stopper: These creative long exposure filters reduce the light entering your lens by approximately 10 stops. This means that you can increase the exposure time during the day making your picture capture the movement of a scene. This can be clouds, water, people, vehicles..

LEE ND 0.9: Reduces exposure by 3 stops  on the top-half of the filter without affecting colour balance. This allows the light from the sky to be reduced allowing greater detail of the foreground to be captured.

EF-S 10-22MM: A Wide-angle lens was necessary to capture the entire scene.

Park at West View Road, Hartlepool, TS24 9LJ.
Walk through the near-by tunnel under the railway line and keep heading straight forward to the sea, turn right for the pier. This location is remote and also very dark at night!