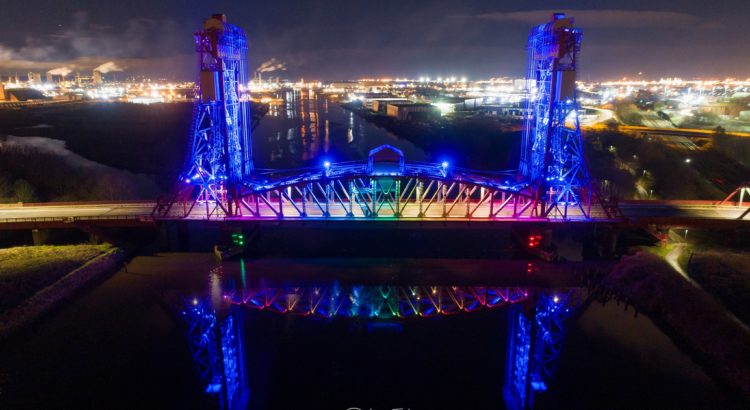 The Tees Newport Bridge in Middlesbrough is one of the oldest lifting bridges in the UK, built in 1933, or, as I refer to it… the ‘metal monster’.

When I was a child the area of the bridge was always synonymous with the giant waste incinerator plant that was home next door. The incinerator’s access roads curled round and underneath the bridge itself and headed up raised concrete ramps allowing you to drive your car straight inside the belly of the giant beast. It always fascinated and repulsed me in equal measures. Peering out from the car window (I was never allowed out) you could see the most enormous stinking pit of rubbish off the concrete precipice edge and a giant metal claw dragging huge handfuls of rubbish into the centre of the glowing wall of fiery blaze.

Even by the area’s industrial heritage the site was an eyesore and it was demolished just before the turn of the millennium.

I wanted to capture how the bridge looks as it approaches its centenary and the turn of a new decade. In more recent years it has been refurbished with major renewal on much of the steelwork and paintwork, restoring the bridge back to its original colours (grey and red) and a new LED light system installed. The local council can now alter the lighting scheme as it wishes.

Each Christmas it is lit up with the colours of the rainbow and the colours ripple down the bridge gently. The top of the bridge remains lit a bright blue.

Stockton Council’s Festival Lighting programme is agreed annually and runs January – December. It includes lighting of the Riverside, Newport Bridge and Town Centre lighting columns / fountain lights. These are the upcoming dates for 2020.

Tees Newport Bridge 2020 Built by Dorman Long in 1933, a local company who also built the Tyne Bridge and the Sydney Harbour Bridge. It was designed to lift up to allow the many large vessels up and down the river. Seen here lit up for Christmas. Which photo do you like best? 1, 2 or 3? #teesside #middlesbrough #stockton #tees #newportbridge #lovegreatbritain #bestunitedkingdom #loves_united_kingdom #britains_talent #explore_britain #travelgram #travel #travelblogger #instatravel #instabritain #SonyA7RIII #leefilters #visualambassadors #explore_britain #wanderlust #industrial #industry #scenicbritain #ukpotd #landscapehunter #ig #igers #insta #instagood #igdaily