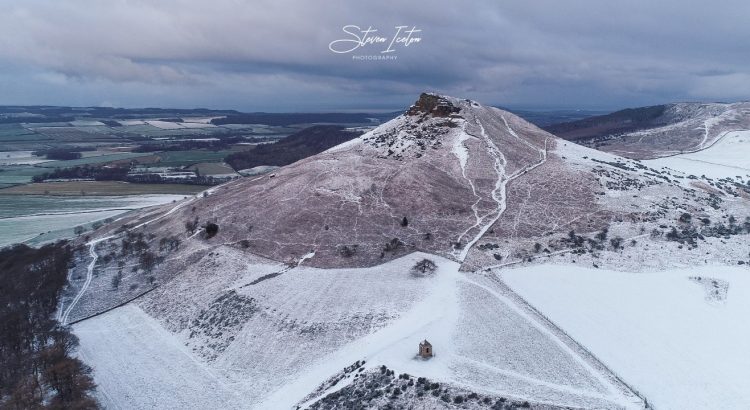 With the arrival of cold winds from the East out of Siberia, snow began to fall and transform the moors into a winter wonderland.

I took the Friday afternoon off work, charged the drone and camera and set up to head out. Last winter’s snow saw me make a similar trip where I tried and failed miserably for a while to get up many of the icebound tracks to the top of Roseberry Topping. I ended up using my tripod in attempt to claw my way to the top. I actually caused it some damage which took a few months to sort out! (never again)… With this in mind I had come prepared and invested in some cleats for my boots, to anyone not familiar they are a set of spikes that can be chained on to your feet which make walking on ice a whole lot easier and safer!

The climb to the top was hard work carrying all the kit but would have been near impossible without the cleats on my boots.

I set the drone out to capture some footage of the sunset around the peak, the still below was captured out of the video using Adobe Premiere Pro.

The weekend saw even more snow so I headed back out shortly after sunrise this time to capture some timelapse and some more drone footage, it was a chilly morning with lows of -6c and all the roads were frozen and treacherous but the sun was shining and it was great to be out.

I climbed up through Newton Woods and headed to an area where I know of a timepost in the ground, a timepost is a post used to fix a location to allow shots to be repeated on different days with the same composition. I plan to capture a timelapse through the seasons at this location for a documentary I am working on.

Once I had set the timelapse running I got the drone out to capture some more of the crisp morning.

Some stills extracted from the videos captured with my DJI Phantom 4 Pro drone.

The snow has arrived on Roseberry Topping. 📸 thanks to @Steveniceton.co.uk for tagging us on #teessidegazette