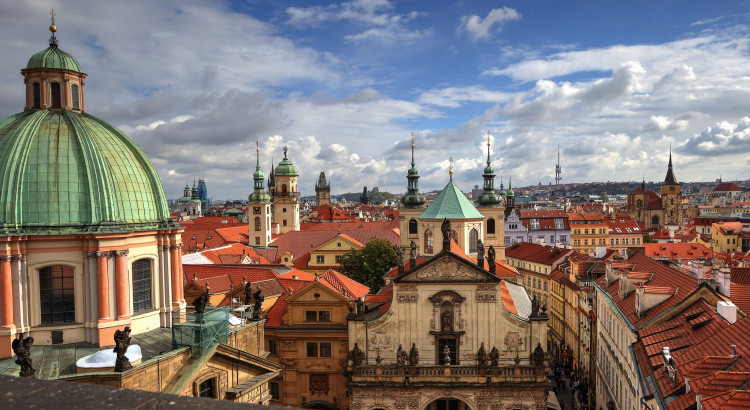 A photo tour of the city of Prague.

The Strahov Monastery, one of my favourite places in Prague. I thought I’d missed the chance to photograph this room as they closed up at 12 but it was only for an hour. Enough time to sample the monastery’s on-site micro brewery selling very nice unpasteurised amber beer in the midday sun. The staff were also very patient with me whilst taking this shot with my tripod and lots of other visitors! You must buy a photography licence to take pictures in the monastery; however, it was only a small sum. Well worth it to work with such a location. There’s also a guided tour that takes you into the rooms that aren’t open to the public but it must be booked a few days in advance and subject to availability.

The Town Hall not only holds the famous astronomical clock, where tourists draw and disperse like an hourly tide but unmissable views over the city. The people look like ants below and all corners of the city can be seen. The climb to the top is also interesting in itself.

Sunshine after the showers! On the walk to the Strahov Monastery, a tram crossing the Legion bridge (Most Legii) across the Vltava. The Hunger Wall is visible in the background amongst the trees with the last of the morning’s showers clearing over the hill. The name of the wall also has a story. It has also been known as Zubata (toothed) and Chlebova (of bread), all names relating to food. The reason for this is that the wall was built at a time of great famine in the Czech lands. The construction of the wall was a mode of employment for the city´s poor and starving inhabitants. Working on the site they earned money, hence, they were able to buy food for their families. 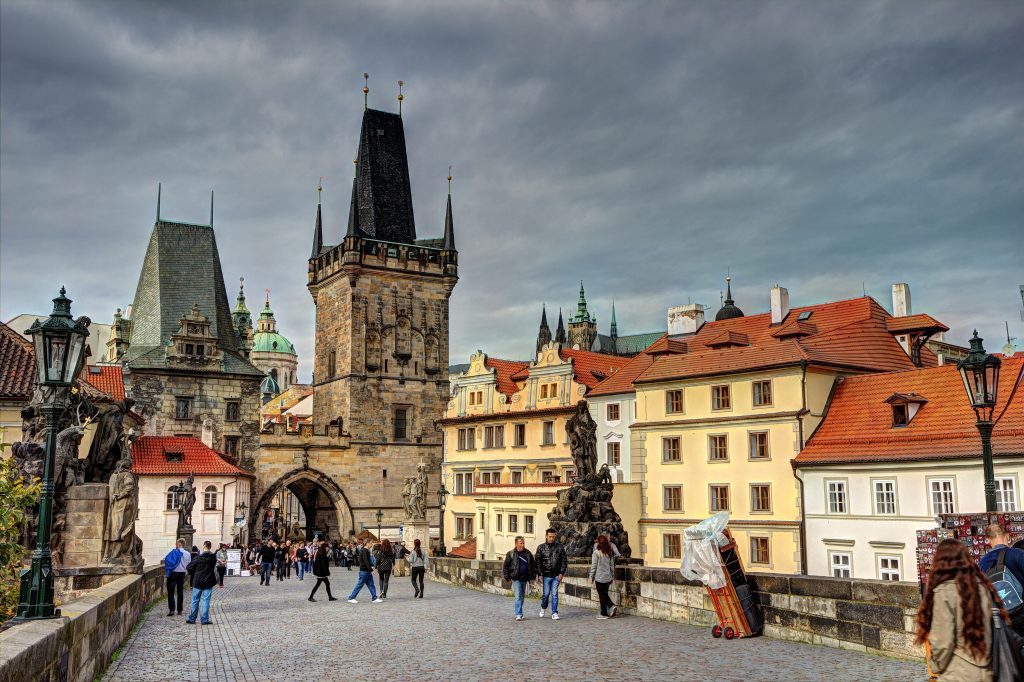 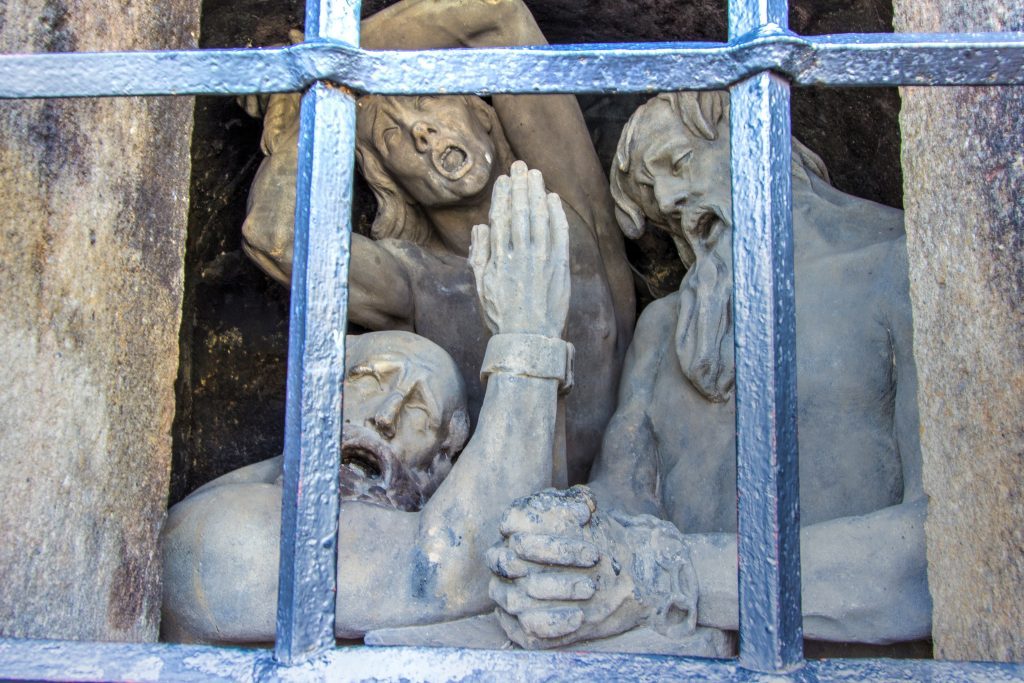 The Renaissance Grand Priory Water Mill, driven by a big wooden wheel immersed into Certovka stream, was built during 1597-1600. However, a mill has been standing on the same land since the medieval times. The name “Velkoprevorský / Grand Priory” refers to the owners of the mill – the Order of Maltese Knights, the commendam of which is situated in close vicinity. The mill can be found at the Kampa Island end of Charles Bridge. 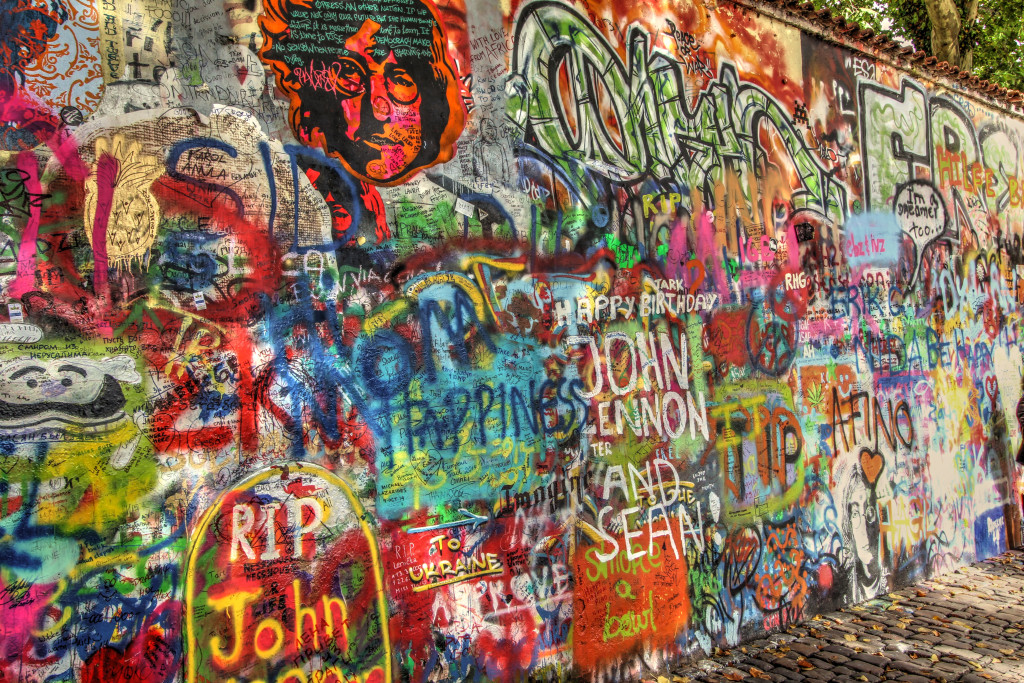 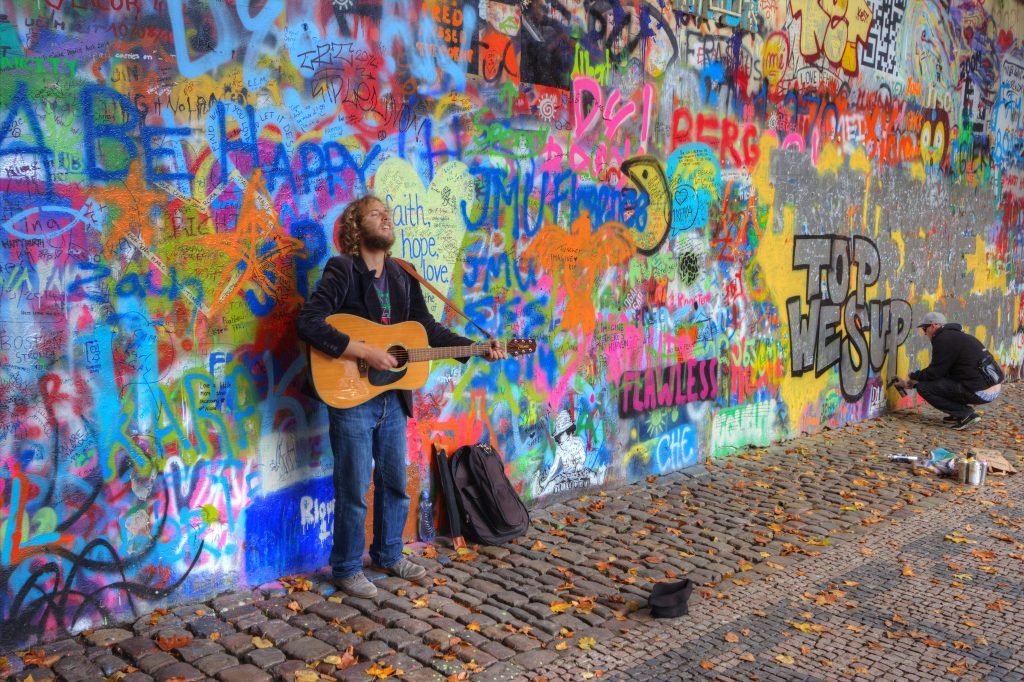 I watched a guy as he sprayed a message in support of the Hong Kong democracy protest movement, somewhat more intelligent than the ‘Andy has herpes’ message next to it!

The Lennon Wall or John Lennon Wall, is a wall in Prague, Czech Republic. Once a normal wall, since the 1980s it has been filled with John Lennon-inspired graffiti and pieces of lyrics from Beatles’ songs.

In 1988, the wall was a source of irritation for the communist regime of Gustáv Husák. Young Czechs would write grievances on the wall and in a report of the time this led to a clash between hundreds of students and security police on the nearby Charles Bridge. The movement these students followed was described ironically as “Lennonism” and Czech authorities described these people variously as alcoholics, mentally deranged, sociopathic, and agents of Western capitalism.

The wall continuously undergoes change and the original portrait of Lennon is long lost under layers of new paint. Even when the wall was repainted by some authorities, on the second day it was again full of poems and flowers. Today, the wall represents a symbol of global ideals such as love and peace.

The wall is owned by the Knights of Malta, who allowed the graffiti to continue on the wall, and is located at Velkopřevorské náměstí (Grand Priory Square), Malá Strana.

A similar wall inspired by the original wall has appeared on the walls of the Hong Kong Central Government Offices, with citizens posting colourful post-it notes with their democratic wishes for Hong Kong during 2014 Hong Kong protests 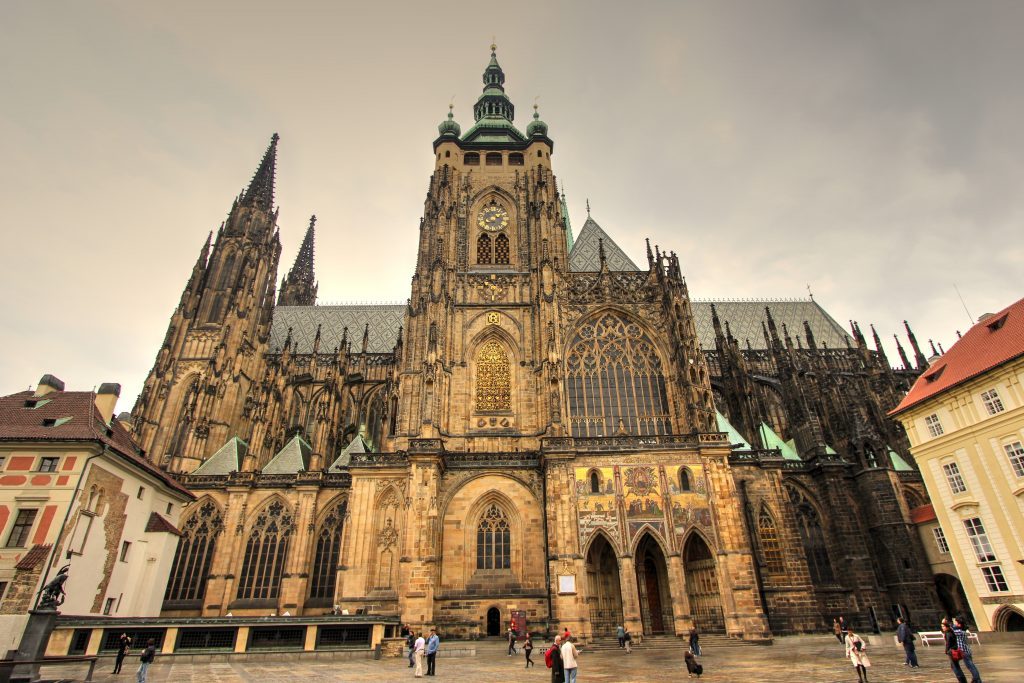 The cafe sells amazing goulash served in the centre of a hollowed out bread loaf. 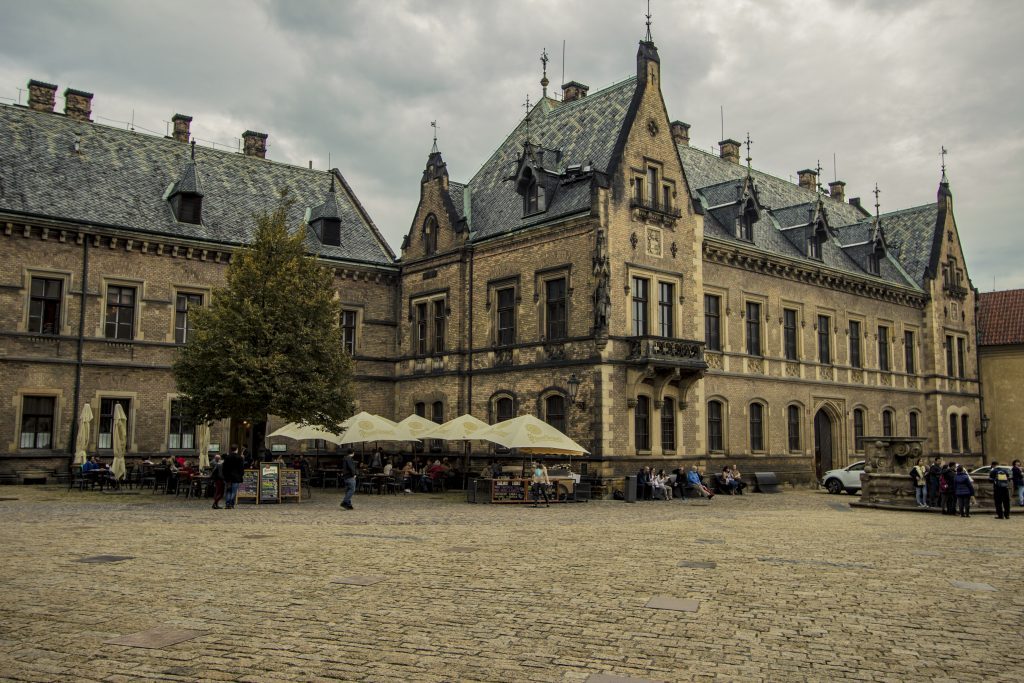 I spent many hours in awe of the stained glass windows in the cathedral that glowed in the sun.