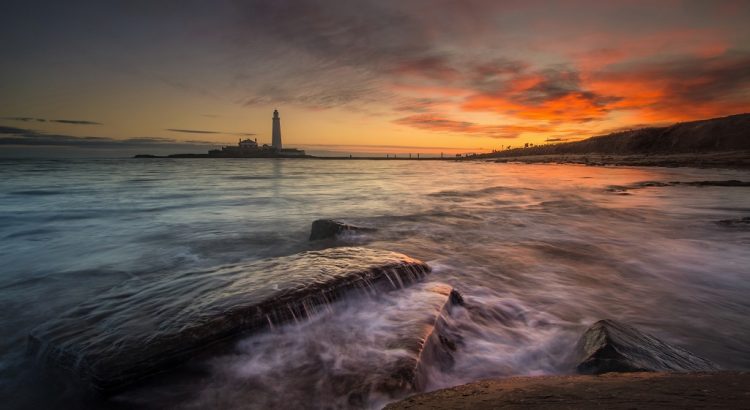 Fellow photographer Stephen Tierney persuaded me to give up my regular Sunday morning lie-in for a trip up to St Mary’s Lighthouse in Whitley Bay, it’s a location that’s been on the location list for a long time so it was good to finally pay a visit! Driving up the A19 the sky looked too clear and a little discouraging after a pre 5am start.

Parking up at the nearby car park we could see that we were not alone at the location, a photography club was already in situ, this is a well known location and is very well photographed. The group were milling around the same area, I like to talk to fellow photographers but I also like to strike out on my own and find something different. There was plenty of room however, scoping around it soon became clear that the best location for the sunrise would be from further north up the bay. The beach curves round and my eye drew me to some rocks with waves breaking over them. One particularly large flat rock immediately struck me as being the first composition, though, getting to it over the pile of jumbled slippery rocks was quite another matter!

The flat sky suddenly burst into life with the first light of the day. I set the camera up with a 0.9 ND hard grad and the circular polariser, as the scene was quite dark it allowed me to get a 2-3 second exposure without needing to put a further ND filter on. As with all seascapes I shoot as many shots as I can in order to try to capture the waves at the best times for interesting features/patterns. I could see the water breaking over the big flat rock, it was just a case of timing it right. Setting the remote shutter release into lock mode, I managed to capture a particularly big wave rolling over the rock and draining off.

The sky continued into a soft golden light, the tide however was still rising and was threatening to swamp my location at any minute.

There was just enough light left for a shift in position to catch the last of the light which was rapidly getting washed out by the rising sun.

A long exposure of the waves gently washing over the causeway was in order. The light illuminating the island from the side.

With the sun fully out and all of the colour washed out of the sky we packed up and reconvened at the top of the steps to the carpark.

I took a quick phone pic to post to Twitter of the photo group trying to make the most of the scene with some shots of the causeway, though the sky by now was just entirely blue!

Plenty of togs out for sunrise at St Mary’s this morning! #togs #sunrise #landscape #visitbritain pic.twitter.com/uxFrL9MBio

We headed up the coast to nearby Blyth, this location has two shots of interest, the colourful beach huts and the wooden sea groynes.

I opted for a simple minimalist shot of the huts, using the bright colour to contrast with the deep blue sky. The composition also featured the use of negative space with plenty of blank blue sky to emphasise the huts.

I did miss an opportunity here, being a Sunday morning there were plenty of dog walkers around. A particularly photogenic dalmatian walked past, he would have added something to the shot if only he was prepared to pose!

At this stage it was nearly time to pack up and head home for some eagerly awaited Sunday breakfast. I had hoped to capture a long exposure of the beach groynes with the waves running against the wood and across the sand. I noticed a nice feature where the water was pouring through the slits in the wooden boards which would add some interest to the shot; however, it wasn’t to be. While positioning my filters the holder became detached from the lens and fell into the sand! Time to call it a day…

24 hour access is available with parking a very short walk from the lighthouse. It is Pay and Display but it is free before 9am.