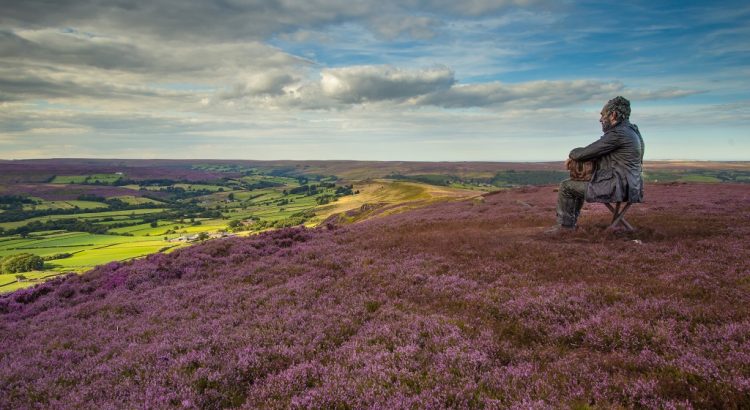 10th April 2019 Update: The Seated Man has without notice been moved to the Yorkshire Sculpture Park and is no longer in place in Westerdale. Disappointing news given that it was originally suggested it would be in place for five years! It’s been so popular it is a shame that it wasn’t to be made a permanent feature! See https://ysp.org.uk/ for further news on when the artwork will be installed and publicly available.

A three metre high statue of a Seated Man has appeared in one of the most dramatic locations on the North York Moors. Rumours abound that it looked like an exiled Jeremy Corbyn sent to the moors to reflect; I knew I had to check it out. With the summer heather season in full swing, it is definitely the best time of year and little excuse is needed to get out into the North York Moors right now!

The painted bronze statue was created by artist Sean Henry and commissioned by the David Ross Foundation. David Ross is the co-founder of the UK company Carphonewarehouse and owns the land the statue stands on at Castleton Rigg in Westerdale.

The Seated Man was put up in June 2017, and is so far proving to be a big draw for tourists and visitors prepared to hike the half a mile from the nearest road to see it.  The figure gazes out over Westerdale contemplating the landscape and is due to remain in place for five years.

Sean describes the artwork as “The tension between the making and staging of figures that seem to belong to the real world and the degree to which they echo our experiences & sympathies.”

10th April 2019 Update: The Seated Man has been moved and is on his way to the Yorkshire Sculpture Park https://ysp.org.uk/ it is no longer installed looking out over Westerdale, a great shame!

The Seated Man. I think the day’s sun got to me, by the time I had climbed to the top of Castleton Rigg in Westerdale I thought the statue looks just like an exhiled Jeremy Corbyn. Commissioned by David Ross foundation, sculpture by artist Sean Henry. Sean describes his work as “The tension between the making and staging of figures that seem to belong to the real world and the degree to which they echo our experiences & sympathies.” #landscape #Northyorkshire #northyorkmoors #landscapehunter #canon #heather #summer #august #yorkshire #york #landscapephotography #togs #ig #igers #insta #instagram #igdaily #instagood #England #uk #scenicbritain #visitbritain #OMGB #visityorkshire #beautiful #nature #art #corbyn

Captain Cook’s Monument, North York Moors, England. James Cook did more to fill in the map of the world than any other one person in history, the original wanderluster. This was not the shot I set out intending to take, I was originally heading to Egton Moor for the lone tree but time was against me so I headed for Gribdale instead. I was tempted half way up the walk to stop at Cockshaw hill seeing the brilliant sunset shining over it but it is now too familiar. #wanderlust #northyorkmoors #Northyorkshire #england #uk #togs #photography #greatayton #captaincook #captaincooksmonument #gribdale #yorkshire #heather #summer #august #hills #sunset #tramonto #nature #landscapehunter #landscapephotography #ig #igers #insta #scenicbritain #igdaily #roseberrytopping #fairytalebliss

August’s sunset. Little Roseberry, North Yorkshire. Sunset over Roseberry Topping from Little Roseberry. I got caught out by how early sunset is now, after racing over in the car and running up the track from Aireyholme Farm I hauled myself and my kit to the top of the hill only to just miss the sun dropping below the horizon! The light however was still really pretty, missing the sunset just gives me the excuse to return and try again! #roseberrytopping #Northyorkshire #northyorkmoors #yorkshire #Landscapehunter #landscape #landscapephotography #ig #igers #insta #instagram #igdaily #scenicbritain #bw_beautifulworld #summer #august #heather #earthfocus #ig_countryside #igersmood #ourplanetdaily #visualambassadors #keepitwild #stayandwander #wanderlust #travel

One thought to “The Seated Man, Castleton Rigg”