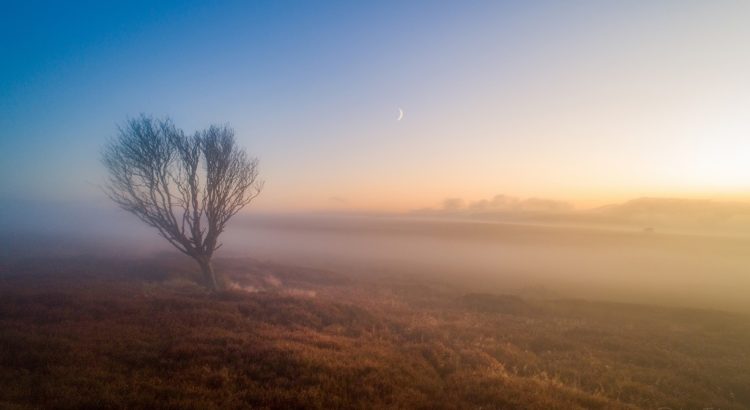 Not just the fear of missing out, but actually missing out! For one reason or another Autumn had been a busy time and I realised that it was going to pass me by entirely this year if I didn’t get out.

I picked up where I left off in summer, it’s insightful to revisit places and see how they change with the seasons. Driving over the top of the moors I spotted some beautiful light over Commondale, a dale that I have not visited before and an easy distraction to accept. I took the turn off and it wasn’t long before i’d spotted something that caught my eye.

I setup the camera for a few timelapse sequences but I could immediately see some nice compositions and set about them with my phone.

I moved on, it was getting cold and the warm car was calling, you forget in the heady days of summer just how many layers of clothes you need to stay warm standing around on these exposed hilltops and I was cursing that I still couldn’t find my hat!

I headed back up the road and into Danby to repeat a timelapse of the heather from the summer. It’s a great spot, not just for the views but also because you can park up and sit in the car with a cuppa while the timelapse is captured!

Some of the timelapse footage I captured on the day blended with earlier sequences from the heather bloom in August. Best viewed with the sound on in fullscreen high resolution..

The Autumn weather hadn’t behaved and I feared I had missed my chance to capture the steam trains of the North Yorkshire Moors Railway running through the dales and valleys with the colours of the season.

The 2nd of November sees the train schedule stopped and the lines go quiet but there’s a limited service of ‘Santa specials’ that start again at the end of the month. The forecast was for a flat calm, frosty cold day with a misty sunrise, perfect, what else could I ask for?

Skirting around the edge of the moors, I got a hint of what was to come, but once I had climbed the gradients of Blue Bank above Whitby I got full sight of a beautiful misty inversion and steam train heading around a bend of a valley in its autumn coat of colour, it’s like another world!

I set my drone up and went through my checks as quickly as possible, I sadly missed the train but it was a beautiful sight to watch!

I carried further on, heading off the main roads proved treacherous and some of the steep single track roads were very hard going, at one point I had all four of my wheels spinning trying to get up a very steep icy hill out of a deep valley. I was starting to wonder if this was a good idea and with the fact the road was a dead-end – what the return journey back down the hill would be like!

I parked up at the head of the trail and by some grazing highland cattle and started the walk out to the location I had in mind.

After I had captured a few timelapse sequences of the light and mist playing over the valley, I heard the familiar haunting sound of the steam train whistle echoing through the valleys. I had my drone nicely warmed up ready and waiting and sent it up to capture the train making its way through the scene, mission accomplished.

With the short days of early winter I could already feel the day drawing in and the temperature starting to tumble again, I headed back to the car.

A showreel of drone and timelapse footage caught on the day, including one of the North Yorkshire Moors steam trains running through the misty valleys.

I headed homeward but the view of the sun setting over the misty moors soon had me pulling back into the moors and a location I had discovered tucked away on a previous trip with some nice looking isolated trees among the heather. I had a wade out to them and sent the drone up to see what I could get.

I brought the drone back with a hand catch as the mist was starting to draw in rapidly and it wasn’t long before I could barely see the hand in front of my face! The mist can be quite disorientating among the barren moors and deep heather, I scrambled back to the car before things got out of hand.

The tree is definitely one i’ll return to again and again to capture through the seasons, a mini project for 2020… I suspect the highlight will be August with the heather bloom but I look forward to finding out!

Another beautiful couple of days out in the North York Moors National Park, i’m very privileged to have it on my doorstep!